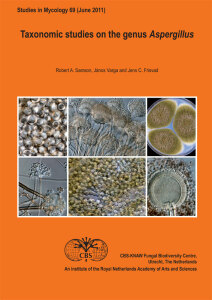 Four new species, Aspergillus eucalypticola, A. neoniger, A. fijiensis and A. indologenus are described and illustrated. Two other species, A. violaceofuscus and A. acidus, are revalidated based on molecular and extrolite data. Two other species described previously, A. coreanus and  A. lacticoffeatus, were found to be colour mutants of A. acidus and A. niger, respectively. Methods which could be used to distinguish the two closely related and economically  important species A. niger and A. awamori are also detailed.

Wild type Aspergillus niger isolates from different biotopes from all over the world were compared to each other and to the type strains of other black Aspergillus species with respect to growth and extracellular enzyme profiles. The origin of the A. niger isolate did not result in differences in growth profile with respect to monomeric or  polymeric carbon sources. Differences were observed in the growth rate of the A. niger isolates, but these were observed on all carbon sources and not specific for a particular  carbon source. In contrast, carbon source specific differences were observed between the different species. The data indicate that the local environment does not result in stable adaptations of A. niger with respect to growth profile or enzyme production, but that the potential is  maintained irrespective of the environmental.

D-xylose and L-arabinose are highly abundant components of plant biomass. In this study, the L-arabinose responsive transcriptional activator (AraR) is identified in Aspergillus niger and was shown to control the L-arabinose catabolic pathway as  well as expression of genes encoding extracellular L-arabinose releasing enzymes.  AraR was only identified in the Eurotiales, more specifically in the family Trichocomaceae and appears to have originated from a gene duplication event (from XlnR) after  this order or family split from the other filamentous ascomycetes. XlnR is present in all filamentous ascomycetes with the exception of members of the Onygenales. Since  the Onygenales and Eurotiales are both part of the subclass Eurotiomycetidae, this indicates that strong adaptation of the regulation of pentose utilisation has occurred at  this evolutionary node.

A polyphasic approach was applied using morphological characters, extrolite data and partial  calmodulin, β-tubulin and ITS sequences to examine the evolutionary relationships Aspergillus subgenus Circumdati section Flavi. The data indicate that Aspergillus section Flavi involves 22 species,  which can be grouped into seven clades. Two new species, A. pseudocaelatus sp. nov. and A. pseudonomius sp. nov. have been discovered, and can be distinguished from  other species in this section based on sequence data and extrolite profiles.
Based on phylogenetic analysis of sequence data, Aspergillus section Usti includes 21 species, including two teleomorphic species Aspergillus heterothallicus (= Emericella heterothallica) and Fennellia monodii. Aspergillus germanicus Aspergillus carlsbadensis, Aspergillus californicus, A. pseudoustus and A. turkensis are described a new taxa. 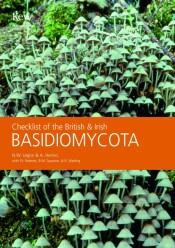 Checklist of the British & Irish Basidiomycota (2005) 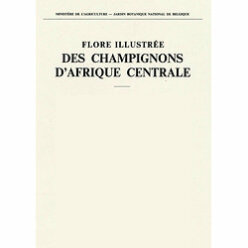